The dawn is the edge of the day – and it was like this today. 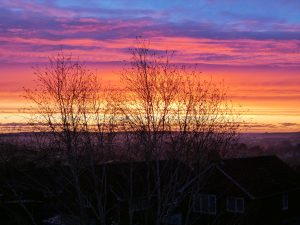 As I walked up the green lane, what first caught my attention was a pair of robins searching in the mud – a pair, not a solitary one.  Throughout the walk, I came across many robin pairs in various places.  A pair of blue tits were flitting and feeding close together among the catkins in a hazel hedge. I heard a great spotted woodpecker lustily drumming down in the woods.  A male great tit shouted its “squeaky gate” song.  Although there was plenty of frost crunching underfoot at the top of the valley, and still many patches of snow on the ground, the silence of only a few days ago is gone.  Here, in the heart of cold winter, spring is edging its way in.

Just a few minutes ago, from my study window, I heard, and then saw, a pair of ravens fly by.  The raven in mythology is a trickster and bringer of change.  Tricksters are edgy characters.  They live on the edge causing mischief and upsetting the settled status quo.  Raven Steals The Light is about the dawning of the first day.  Like all tricksters, Raven does this to suit himself – but it then affects everything.  Tricksters live at the edge – and tip things over the edge.

Born in upstate New York. Moved to the UK in 1971. At home in Devon. View all posts by MaryAb

This site uses Akismet to reduce spam. Learn how your comment data is processed.