I have been reflecting on the four enquiries I have undertaken in the last decade.  My first enquiry was into the experience of fear – how it affects my body and thoughts, what fears are “habitual” and what the origins of those might be, how fear can be regulated, and also how one might work creatively to explore fear.  As a direct consequence, I then began an enquiry into the experience of vulnerability.  An outcome of that was the realisation that vulnerability was an essential element in any relationship of true intimacy.  Without allowing my vulnerability, I would be denying myself the experience of intimacy with another.  This includes a sense of intimacy with the natural world, which is important to me.  The more I opened, the closer my embodied connection became.  I think my increased experience of vulnerability opened me to my own desire – to exploring the question, What do I want, in the deep sense?  The enquiry themes have evolved, one out of another.  They are about perceiving, allowing, choosing, and creating connections of one kind or another.  Fear cuts me off from connection.  Learning how to understand and engage with my fear took me to a place of greater openness – greater vulnerability – and that vulnerability brought with it more connection.  In my enquiry into desire, I came to a strong sense of my deep desire for connection – with nature, with people, with my own past and possibilities.

In any journey into inner depth, there are many layers to discover and move through, and all the layers seem to contain resonances, flavours, of the previous layers.  “The Edge” has a frisson that goes back to fear, and to fear’s antidote: curiosity.  It is also about opening to feeling a connection with the unknown.  It’s possible that this enquiry into “The Edge” is about a place of potential connection.  Before I entered any of these enquiries, back in May 2012, I did a Autobiographical Movement workshop with Sandra Reeve that she calls Strata.  As part of this workshop, we did some movement on a clifftop near Charmouth, Dorset.  In my notes taken then I wrote, “Giving way to gravity, so…lovely! Flowing downhill over all the ups and downs.  Then – feeling the DESIRE to see the edge!”  The capital letters were part of the notes.  So, it feels like there are some strong connections driving what I am enquiring into, although I was not aware then where it would be taking me.  I was on the edge of something – a transition was getting underway outside conscious awareness.  Each enquiry seems to have taken me deeper.

“The Edge”, as I am conceiving of it, is one between two quite different places, things, beings, experiences, perceptions – as in between the sea and the cliff top above it, or being asleep and being awake, between life and death, between me and this tree I have my hands on, between me and my loved other.  We are always on the edge of something – given the constant of change in our lives and the sense of self and other that exists as soon as there is sense contact and perception.  There can be a real sense of space between in which to inhabit the experience of being on the edge.  Buddhist Emptiness, Sunyata, reveals that there is no edge – but the meditation practices (the letting go of/ dissolving of clinging) that lead to this require the considerable and repeated sense of spaciousness.

Generally, I can feel myself on the edge of a strong emotion – like anger – before tipping into it.  I know then that I have choice in how I deal with that emotion and that is a kind of freedom.  I might let the anger come into my eyes and look at the person whose speech or action precipitated the anger.  That might be enough.

Some edges are finer and more difficult to experience than others.  I was on the edge of consciousness the other morning – before I fainted.  A thin edge with no recollection of, and therefore no image of, going over the edge.  But over I went – to consciously find myself on my back on the floor, looking up at the ceiling.  No great harm was done.  It was part of my reaction to the vaccine I had the day before.  What I hope to be able to do, in future, is recognise better that approach to the edge of consciousness, and take care of myself in it.

Is fainting practice for dying?  Is falling asleep?  What edges are important to make space in and inhabit?

I spent this morning at the edge of the Exe Estuary, watching waders with a group led by the naturalist, Matt Collis http://www.devonwildlifetours.co.uk/.  An estuary, and all the life within it and along it, is dominated by the tides.  It is a place of constantly shifting “betweens” that are easy to observe and appreciate.  There is so much going on, yet being at the edge here can bring a sense of inner peace along with moments of intense beauty.

The tide turned two hours ago.

Curlews and godwits that have been resting on one leg,

their bills tucked neatly under their wings,

underbellies reflected in the smooth mirror of this backwater,

begin to wake and shake their feathers,

getting ready to fly downstream.

Later, I stand on a wooden platform

To the east the sun is high now.

Suddenly, all I can see in front of me

are the dark silhouettes of redshanks

their wet feet coated in silver.

If there is perception, there is self and other – that which perceives and that which is perceived. In exploring my theme of being on or at ‘the edge’, I will only occasionally mention the quantum view of there being no edge. Influenced as I am by Buddhist teachings on ‘Emptiness’, I rather take that as read.  There is no edge to be found.   But there is the perception, the experience, of edge. It is here I will explore.

This morning it is raining, so I set out with my wellies and big, black umbrella. I walk up the green lane that begins at Charnley Avenue and finally joins Barley Lane, after making its way along the edge of Barley Valley Nature Reserve here on the west edge of Exeter. This green lane is all that’s left of the old Bowhay Lane, a route west in pre-industrial times.  The lower part is an edgeland between two housing estates.  When I first started walking it, this had been quite a dumping ground, despite the sign forbidding it.  Gradually, I, and others who started to care, have removed the litter and the worst of what had been dumped.

Although actually being surrounded by houses, as soon as I start up the lane I feel a sense of wilderness, of not quite knowing what is ahead, even though I walk this route almost daily.  Except for the sound of my feet and the rain on my umbrella, it is quiet today.  After it crosses over a street, High Meadows, the path slopes up into a sycamore grove.  These trees are large and old, older than the houses that now are only on the left edge, obscured by the verdant growth in the lane itself.  Beyond and above the lane on the right, barely visible, is the nature reserve.  This grove feels very different in different seasons.  In summer it is a welcome refuge from the sun.  In winter, its huge, spreading branches are revealed, creating shapes in the shadows on the ground. Today it is damp, leafy and dark.  The sound of rain echoes here.  As the path climbs out of the sycamore grove, there is a huge, old holly tree on the left.  The bare ground around the twisted, exposed roots of the trunk are a playground for foxes and/or badgers, although I have never found signs of a den here. Several small pathways created by them lead down from the nature reserve. The path continues up and the canopy opens into hazel and field maple. There is a wonderful sound ahead.  When I reach the Magic Tree (a hawthorn that stretches right across the path), it is directly above me.  A flock of goldfinches are at the top of the tree.  The accumulation of all their witterings have become one sound – a choir of birds.  This is part of why I have named it the Magic Tree. I stand and listen to this music of the edge.

Eventually, I continue to the gateway into the reserve.  I lean on the swinging gate to take in the view of Exeter and beyond. I can’t see as far in this weather as sometimes,  but the city, itself, is visible with low clouds hanging over it.  Through the gate, I am at the top of one of the hillside meadows that make up the reserve, along with overgrown hedges and patches of woodland.  Halfway down this hill is an island of scrub, brambles and small trees where, I have been told, the ruins of a WW2 German bomber lies.  I wouldn’t like to try to get in there to find it.

I turn left and walk along the top edge of the reserve, next to a fabulous edgeland between the reserve and the green lane made up of a massively overgrown hedge, hazels and bramble dominating.  This is the haunt of wrens, robins and blackbirds, with the various tits and finches, magpies, wood pigeons and crows as constant visitors, joined by summer migrants like chiffchaffs and blackcaps.  Very occasionally, I am gifted with a visit from a raven, usually near the top of the green lane, where the open countryside stretches towards Dartmoor.  Today, nothing much seems to be going on.

I reach the old path that leads into the woods.  The lovely bent ash is there – too wet for me to sit on today, so I rest a foot on a place low down where two small branches separate and lift myself up to where I can just lean against the big branch.  It feels comforting.  I lower my umbrella to listen to the sounds of raindrops on the canopy above me.  I can smell the wet leaf mould.  The rain in its restlessness is creating a kind of stillness – in my heart and mind, as well as in the birds around.  There are fewer dog walkers on the path above.  The fallen leaves from the nearby cherry tree shine red against the dark ground.  I know I will walk home soon, but choose to linger in the nothing-much-happening at the edge of the woods. 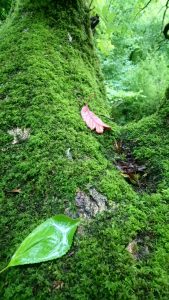