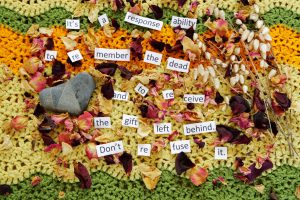 This is on a blanket that my mother used to wrap around herself – and I still use when I am wanting warmth and comfort.  The heart stone comes from my friend, Julia, who died a few years ago and who used to collect heart stones – and the rose petals are from roses in ex-husband’s garden, that my daughter now cares for.  She brought them to me after my mini-stroke last year.

On the 11th May, 2019 – a year ago today – I had a bad fall which precipitated a mini-stroke, leaving me helpless and housebound for almost a month.  It then took me several months more to slowly regain my energy.  A stroke nurse was amazed and fascinated when I told her it was one of the best things that ever happened to me.  It opened me up in a way that I have been preparing for, and desiring, for a very long time.  Hallelujah!

A year later – and the whole world is changing through the pandemic experience of COVID19 coronovirus.  I have had to close down in the sense of staying at home – but my practice is still to keep opening.  Opening to death and loss is the theme at the moment.  Two people who have deeply influenced my life in recent years, including this enquiry into desire, have died recently – neither from the virus.  Javanese movement artist and teacher, Suprapto Suryodarmo died in December of heart failure – and Rob Burbea, Buddhist meditation teacher, died last week of cancer after an extended and brave effort to keep living.  Loss is heavy in my heart.  In his last recorded talk, Rob talked about death and dying and said it is not all about loss.  “There is a gift there.”

A gift came my way from my step-son last week.  He is writing an information leaflet on mental health to help inform mental health support workers who have little experience or training and he wanted me to have a look at the draft and comment on it.  In it he wrote that depression was a misnomer – that really it is a “depressive response”.   This slight shift in the way of looking has quite a strong effect – no longer seeing it as some “thing” that arrives and blankets my life, but as a way my psyche is responding.  The “thing” that needs to be understood is more whatever it is that I am responding to than the response.  This is such an empowering difference.  I have suffered depression on and off since my late teens.  There have been times when it has gone on for months and months – feeling like a whole mental landscape, a kind of empty desolation I am marooned in.  There is no desire felt in this place – although, from a distance, I can see a desire coming from the depths of my soul to change and to grow.  In time I began to figure out that my depressions related to having to fundamentally change in some way – and eventually I saw it more positively as some kind of initiatory experience.

In the last ten years, despite the losses and changes, I have not experienced depression in any long term way.  Yes, I can go down low and very quiet for a few days or even weeks, but I don’t seem to get stuck there anymore.  One of the main reasons I gave for my retreating out to Dartmoor for three months in the spring of 2010, after retiring from teaching, was to see if this could alter my usual depressive response to big changes – and it did.  I was proactive in my withdrawal from daily life, opening eagerly to the retreat if not without trepidation, and it was a transformative, beautiful time.  I gave myself a gift.

I have already written in this blog about the gift I received from my mini-stroke experience (Going deeper to be loved).  Now I am waiting, practicing opening, wondering what the gift might be from the recent death and loss.  I know I have already received it and just don’t yet see what it is.  My response, true to my nature, is a depressive response.  What is the gift?